Construction films for roofs and walls

The use of films in the construction process is often underestimated during the planning stage of a new building. However, properly selected and installed films can provide the house with extra security against excessive accumulation of moisture and help to retain heat. Nowadays, when there are several types of films with different features available, the proper use of films for the construction of buildings provides an opportunity not only to prolong their service life, but also make savings on heating expense.

Construction films are mainly used for building roofs and facades and are classified into several major groups depending on their intended use. Each group of films is designed for certain tasks and differ in structure, material and technical characteristics.

Construction films available in Latvian market can be divided into four groups: vapour insulation, wind barrier, waterproofing and diffuser membranes or films. Each of these types is separately described in this blog.

One of the key characteristics of films is vapour transmission capability. It is characterised by the ability of films to let a certain amount of water vapour pass, for example, during a 24-hour period through an area of 1 sq m with relative humidity 85% at a temperature plus 24ºC. Another important indicator of technical characteristics of a film is watertightness or the ability of films to retain a water column of certain height on its surface. This is a particularly important indicator for wind barrier and diffuser films. Films are also characterized by other values – their tensile strength both lengthwise and crosswise, fire resistance of the film material, and its weight in grams per square meter. 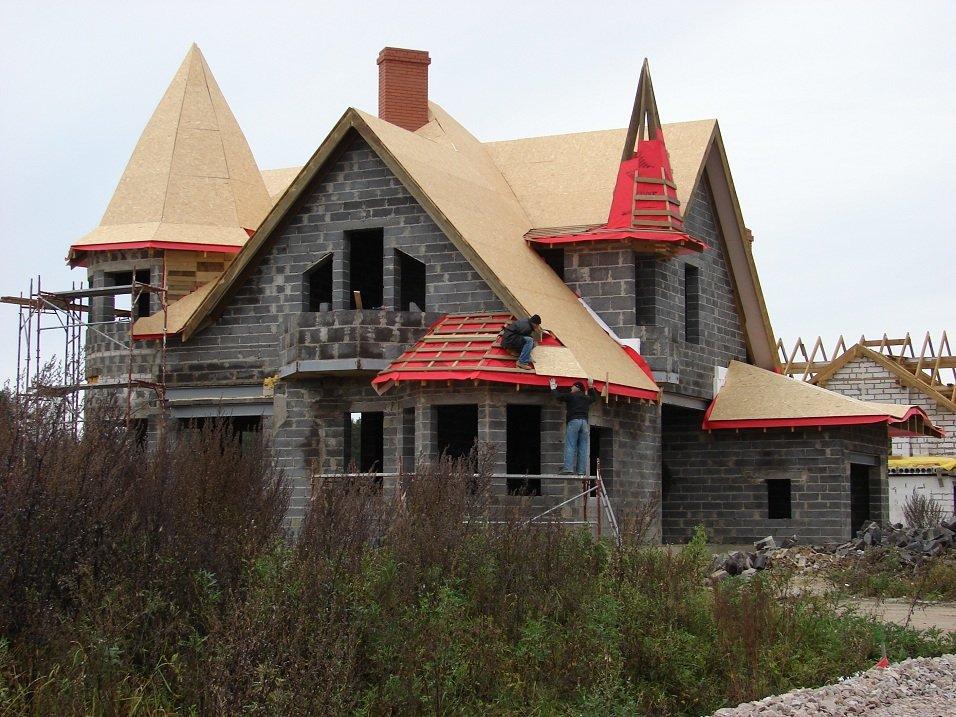 In case of roof structures, a distinction is made between metal roofs that rapidly heat up and cool down, and roofs, the covering of which are less exposed to extreme temperature fluctuations.

There are at least two or even three types of films recommended for metal roofs. The heat-insulating layer of roof structure (rock wool, etc.) is covered with a vapour barrier film from the inside; and on top of the wool, which is usually filling the rafters to the top, the wind barrier film is laid (it covers the wool from the top). Both of these films are installed close to the wool, without gaps. Above the heat insulation layer covered with the wind barrier film, it is recommended to leave a small ventilation gap (about 5 cm), and install a waterproof film with anti-condensation layer on top of the ventilation gap.

It is important to know that breathable materials (in this case – the wind barrier film) are joined together with the overlap (without a dividing line) in the ridge of the roof, but non-breathable materials (the anti-condensate film) are not joined to the construction during installation – a gap is left so that moisture accumulating on the anti-condensate film could escape through the ventilation gap.

Two types of films are used for other types of roof coverings (concrete or clay tiles, bitumen shingles, reed roofs, etc.), which do not produce extreme temperature fluctuations and increased amount of moisture. Heat insulation material (rock wool) is covered with a vapour barrier film from the inside, and a diffuser membrane is laid from the outside providing both waterproofing and wind insulation. Since the diffusion film is breathable, it is laid close to the wool layer and no special ventilation gaps are left.
In flat roofs, only vapour barrier is used in most cases because the functions of films are ensured using other construction materials, e.g., bitumen rolled covering. 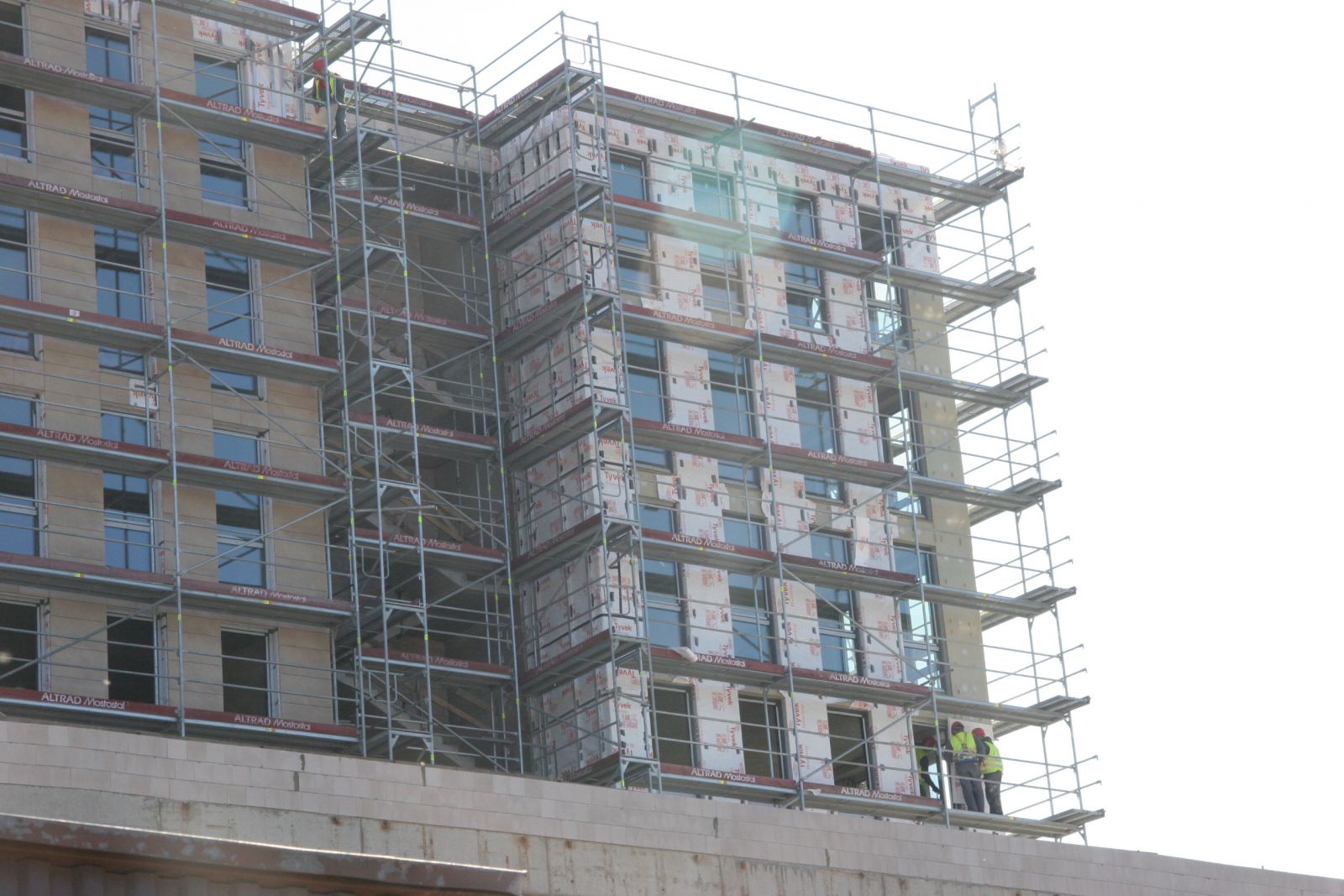 Construction films are traditionally used for wood-frame houses and their task is to ensure heat resistance of facade constructions and keep the materials dry. Usually, there is a heat insulation layer (rock wool) with a vapour insulation film from the inside, and with a wind barrier film from the outside. Slats or staples are used for fixation, taking into account that the vapour insulation film requires bonding together, but the wind barrier film can be installed on top of the overlaps.

Specialists have noticed quite a few mistakes related to installation of films. This especially applies to the construction of roof pie. Films are not properly selected or installed in wrong combinations. Each film has its own use which should be precisely clarified before making the purchase. One should be aware of proper installation of films, observing the correct side, namely, the text and advertisements printed on the product are usually on the top side of the film, thus indicating which side of the film should be laid on constructions. If the film is installed wrong, the reverse effect is obtained – vapour and moisture that should be avoided will now flow onto the heat insulation and constructions. In this case, the roof or wall construction will require fundamental repairs and the work will start over again. 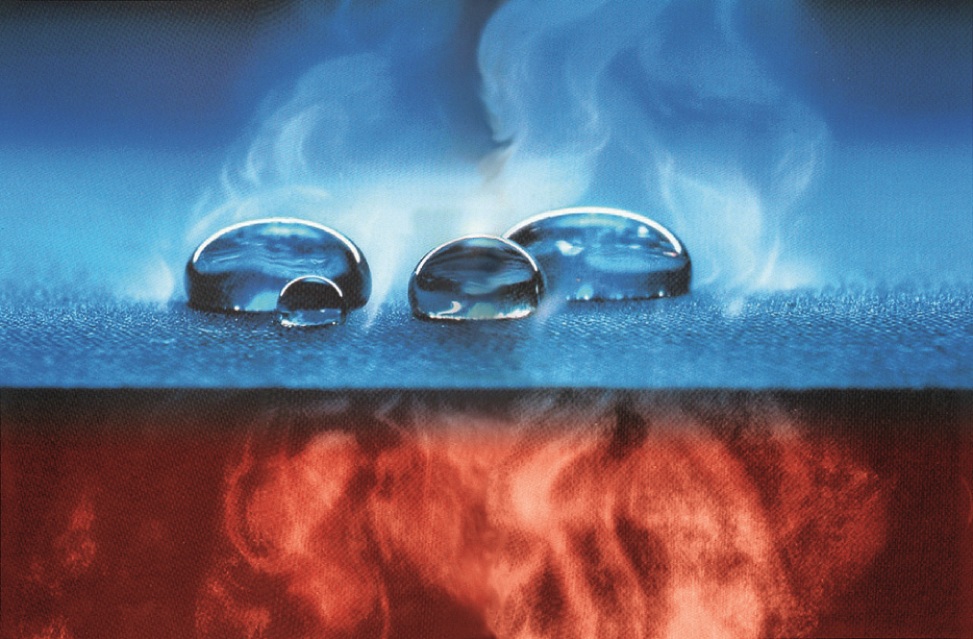 Diffuser membranes combine the properties of several films and as such they can be regarded combined films. As a waterproof material, these membranes protect heat insulation and wooden constructions from water, at the same time functioning as wind insulation protecting from energy loss due to wind. The structure of membrane allows water vapour to move freely to the outside, but prevents moisture from entering the heat insulation from the outside, thus ensuring efficiency.

The diffuser membranes may have two, three or more layers. Two-layer membranes are less resistant to mechanical damage, therefore more attention is required during installation. Three-layer films are more resilient, since the diffusion layer is covered with a special protective layer. Four-layer diffuser membranes are particularly resistant being embedded with a special reinforcement during the production process. Therefore, the membrane acquires additional strength remaining flexible. High vapour diffusion is ensured with micropores with a diameter of 1 - 2 microns evenly distributed on membrane surface.

Tyvek Soft – a diffuser membrane with excellent vapour diffusion properties and good resistance to water and wind. This membrane is designed for pitched roofs with insulation as wind- and waterproof film placed next to the rock wool.
Tyvek Solid – in addition to the excellent vapour diffusion properties and resistance to water and wind, this membrane also has increased mechanical strength. Recommended as wind- and waterproof film for insulated and uninsulated pitched roof constructions.
Tyvek Supro Plus TAPE – in addition to the qualitative technical characteristics, this film features an adhesive tape fixed along one edge for connecting the films, thus facilitating the installation process. Used for all types of pitched roof constructions. 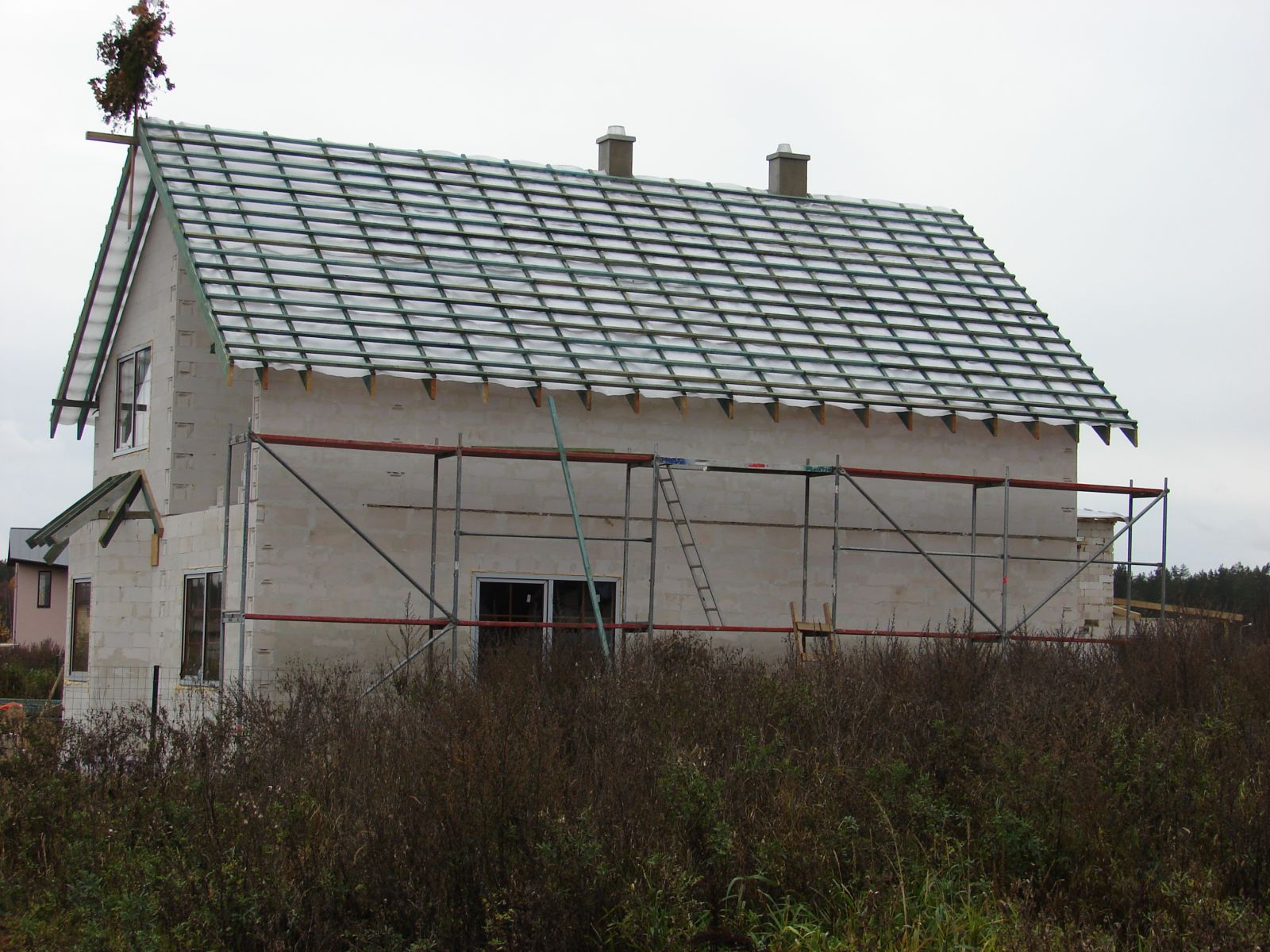 The task of these films is to protect building constructions from formation of condensation and moisture – snow, rain, water and other adverse factors affecting the constructions.

When installing the waterproof or anti-condensate film in roof constructions, an air gap of approximately 5 cm must be left both above and below the film. These films should never be laid close to mineral wool heat insulation. 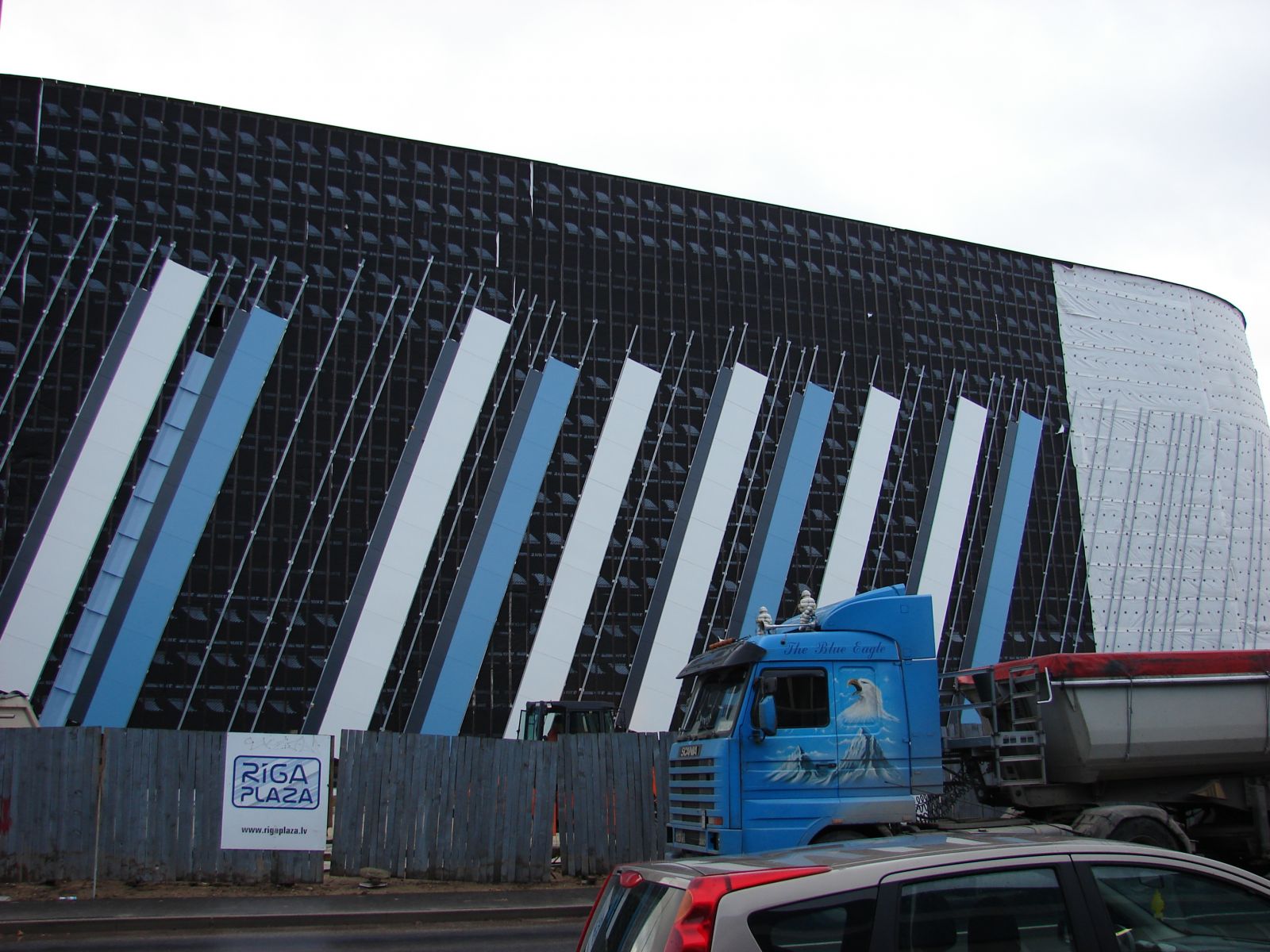 The main task of wind insulation to ensure optimal conditions for heat insulation material and external constructions of the building. The main functions of wind insulation films are the protection of heat insulation layer against air and moisture, as well as provision of one-way movement of water vapour from the inside to the outside. Therefore, wind barrier films should have a high level of vapour transmission.

These are the most important quality criteria of wind insulation:

The wind insulation film is installed from the outside, close to the insulation material
(without a gap) leaving 10 – 15 cm overlaps which should be bonded using specially designed adhesive tapes, e.g., the Tyvek tape. Above the wind insulation, ventilation gaps must be left of no less than 5 cm for roofs and no less than 2 cm for external walls.

When choosing the wind insulation, we recommend choosing, e.g., the Tyvek HouseWrap film. This film is used for pitched insulated roof and wall constructions as wind insulation of particularly high-quality and very high water vapour permeability. The Tyvek HouseWrap wind barrier film is particularly suitable for insulated wooden constructions. The film is installed from the outside, close to the insulation material with the printed text facing outwards, leaving 10-15 cm overlaps. If the gap between the facade materials is no more than 2cm, the durability guarantee is at least 50 years. 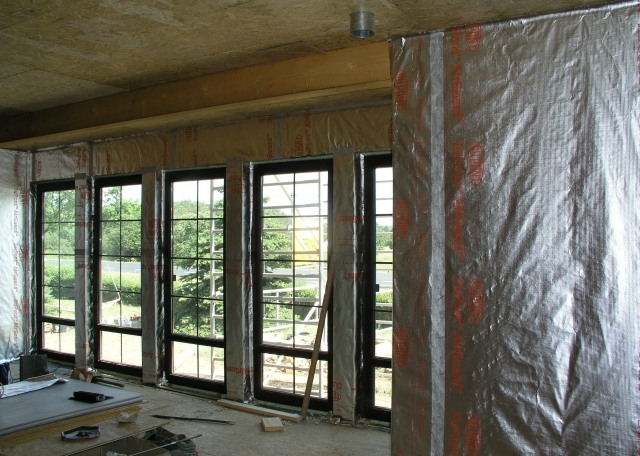 Vapour insulation films or vapour barriers are the simplest and most commonly used construction films. They are impervious to water vapour in both directions
(exterior – interior or vice versa) and are considered non-breathable films. Still, this insulation provides protection against moisture, protecting the insulation material and building constructions. The vapour barrier is designed for insulating roofs, walls and floors.

The market offers a very wide range of films and the quality of products is different, therefore several conditions should be followed when choosing the vapour insulation film. Externally, the vapour insulation film reminds of a standard film, but this impression is deceptive. According to construction standards of the European Union (EU) and Latvia, the film must be at least 0.2 mm or 200 microns thick. It must be made from the initial polyethylene (polypropylene) rather than with additions of the secondary polyethylene, as is the case with many vapour insulation films on offer. It can be noticed with the naked eye – if the film contains additions of the secondary polyethylene, grains of sand, dirt, etc. will be visible, which reduces the quality of the film during operation.

Vapour insulation films of excellent quality should be stable against UV radiation. During the production process, a special chemical additive is added to the mass from which the film is made, thus stabilizing the polyethylene molecules and extending the durability of the film. High-quality vapour insulation films are colourless or light, clear-coloured (e.g., blue) rather than pigmented. The film material must be supplemented with UV stabilizer.

Vapour insulation films of good quality should serve at least 50 years, for lower-quality products this period may be from 5 to 10 years. The fact that the film is of poor quality or has served its time can be seen if moist spots are appearing on the ceiling or other visible construction parts, if mould occurs, premises cool down more rapidly and higher heat consumption is required to reheat them, etc.. 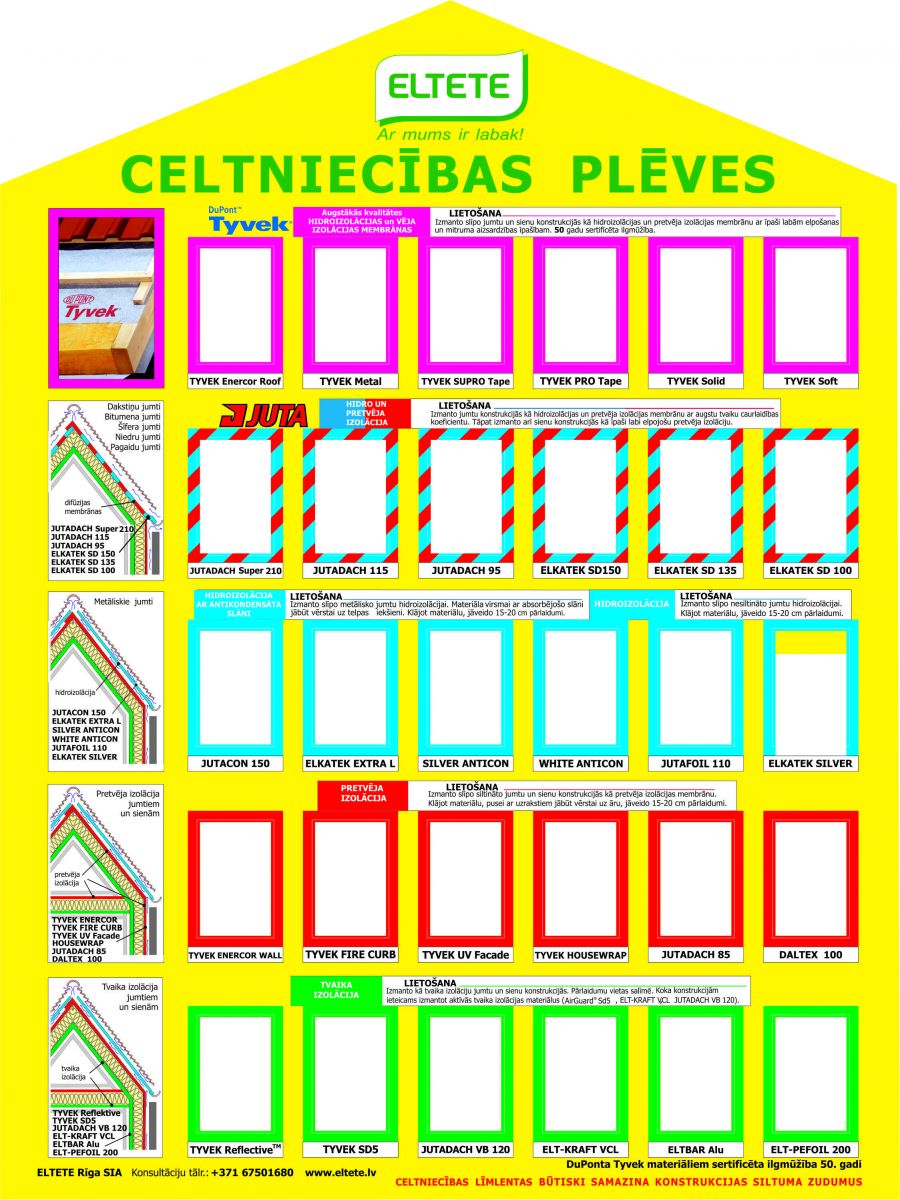 Wind barrier for walls and roofs

Vapor barrier for walls and roofs

Other types of construction films